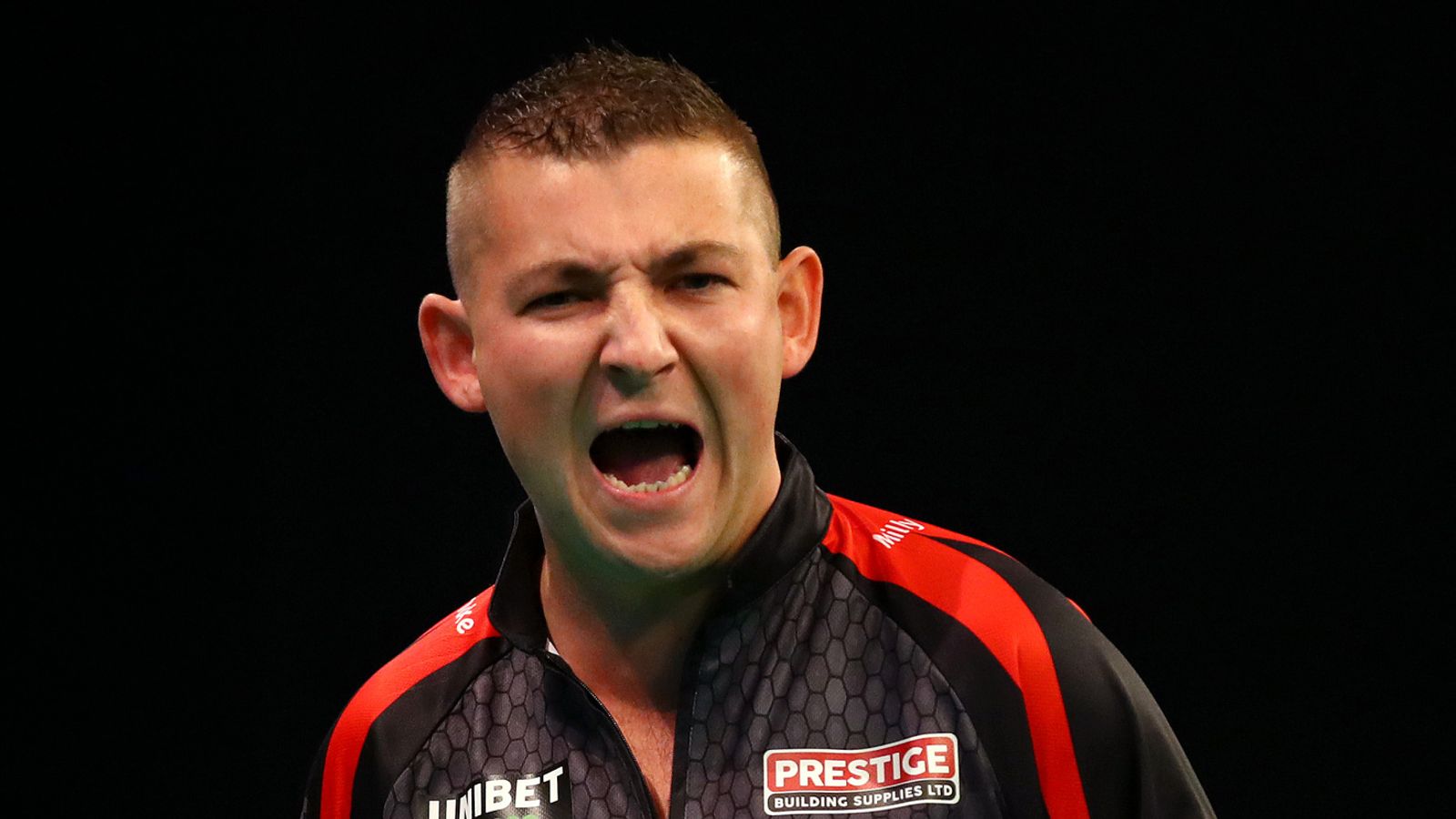 Price, who was within a dart of being knocked out during the group stage, had won 14 successive matches but a clinical performance from ‘The Asp’ saw the world No 3 join world No 2 Peter Wright in crashing out before the last eight.

‘The Iceman’ did not give up his title without a fight, hauling himself back from 7-3 down to 8-7 in front before Aspinall showed his class to cross the finish line in style via the bullseye.

On a dramatic night, world No 1 Van Gerwen stayed on course for a fourth Grand Slam crown with an emphatic victory over Anderson, while Michael Smith kept alive his hopes of a maiden major title with a win over Rob Cross.

Damon Heta completed the quarter-final line-up, beating fellow debutant Devon Petersen to keep alive his own hopes of a fairytale end to the race for the Eric Bristow Trophy.

Gerwyn Price has been walking a tightrope at this year’s Grand Slam of Darts, but on Saturday night, after 14 successive wins in the event and two titles, his reign was over thanks to a brilliant performance from Nathan Aspinall.

Both players produced some sensational moments, but in the end Aspinall’s greater consistency got him over the line as he weathered a thrilling fightback from The Iceman who won five successive legs to turn a 7-3 deficit into an 8-7 advantage.

It was the Englishman who had fashioned a 3-2 lead at the break and followed it up with another three-leg burst to pull clear of the two-time champion. After splitting the next two Price seized his moment to launch a comeback thanks to some spellbinding combination finishing.

A pair of double-tops saw him take out 110 to close within one and when seven missed darts from Aspinall allowed Price to level, the champion took out 75 for the lead for the first time since the opening leg.

From there, Aspinall, the world No 6, won the last three legs with a performance of greater control, although Price will regret missed darts for a 9-8 lead and, when trailing 9-8 himself, a dart that would have taken the match the distance.

In the end The Asp found a spectacular 92 finish via the bullseye to win 10-8 and advance into a showdown with World Matchplay champion Dimitri Van den Bergh.

Michael van Gerwen and Gary Anderson have been playing each other for 15 years and invariably serve up a thriller, but on Saturday night the Dutchman ran away from his rival to record a 10-2 victory.

The world No 1, a three-time Grand Slam champion between 2015 and 2017, lived up to what is fast becoming a habit of doing the right things at the right times to wrap up the biggest win either of them has recorded in contests between the pair over the distance.

A fast start from Van Gerwen saw him claim the opening leg only to see his old nemesis strike back with a 132 finish for a 12-darter, but that was as good as it got for Anderson as a blistering eight-leg burst took ‘MvG’ 9-1 in front and within one of a return to the last eight.

Anderson stopped the rot to claim a second leg of the match but, despite averaging 95 and hitting six 180s, he was afforded just eight darts at double by the resurgent Dutchman who took out 76 to cross the finish line.

For the third time in his four matches this week, Van Gerwen averaged more than 100 and he will now face Simon Whitlock who has proved to have the formula to end Mighty Mike’s major challenges.

Smith stays cool to edge out Cross in thriller

Two weeks ago Michael Smith and Rob Cross teamed up to reach the World Cup final for England. They teamed up again in the opening match of the night to serve up a thriller where ‘Bully Boy’ prevailed 10-9.

Remarkably the 30-year from St Helens is without a major televised title to his name despite defeat in five big finals, but, having ended his two-year Pro Tour drought in Coventry last week, he dug deep to repel a late rally from ‘Voltage’.

Ranked four and five in the world it was always going to be a close contest, with Smith breaking early for a 2-0 lead. Amid a barrage of Smith maximums Cross rallied to get the break back and then hit the front at 3-2, an advantage he kept until the 15th leg of the match.

Smith took out 74 to level at 7-7 and claimed the lead for the first time since the second leg with a clinical 66. He then made it three legs on the bounce with a third classy combination finish to stand within one of the winning post.

There was still time for drama and Cross pounced on three missed match darts to claim an eighth leg and then levelled the contest before he wilted under the pressure, and Smith produced a timely 13-darter to seal his quarter-final date with Jose De Sousa.

Damon Heta continued his dream debut at the Grand Slam by beating fellow debutant Devon Petersen to advance to a quarter-final showdown with James Wade.

The 33-year-old from Perth only secured his Tour Card in January and has moved his wife over from Australia to concentrate on life as a professional. His 10-6 win over Petersen moved him into the world’s top 64.

It was Heta who settled first, averaging 100 for the opening session as he forged a 4-1 lead and with Petersen struggling to find the big trebles that have bookmarked his improved form over the last 18 months, the Aussie found himself 6-2 in front.

With a four-leg deficit to overhaul, a classy 96 from Petersen kept him in touch, but those moments were few and far between as a ruthless Heta took out the next two for an 8-3 lead.

Petersen gave himself a stay of execution with a brilliant 110 finish and claimed two more but it proved in vain as Heta claimed the two he needed with a sensational 144 the highlight of an impressive display.

Heta now gets the chance for revenge against Wade who beat him in the opening game of the group stages – and the Aussie is no stranger to knockout success against ‘The Machine’ having beaten him as well as Anderson, Whitlock and Cross to win the 2019 Brisbane Darts Masters as a regional qualifier.

Don’t miss a dart from the Grand Slam of Darts on Sky Sports as the action continues on Sunday with all four quarter-finals – join us from 1pm and 7pm on Sky Sports Arena and follow us @SkySportsDarts for updates and clips throughout the tournament.

Championship Team of the Month for October | Football News